AMPS: What inspired you to be a director?
Terence Nance: It was probably indirect inspiration from my parents. My mother is an actress and my dad is a photographer so you mix them up and get me.

AMPS: What was your first camera?
TN: My dad got it for me for Christmas. It was a Vivitar point and shoot.

AMPS: Did you originally want to direct music videos first or films? 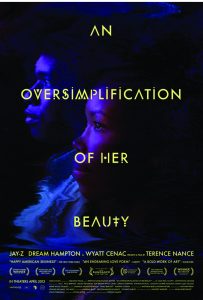 TN: Neither. I didn’t really know what a director was until after I had started making Oversimplification. I started doing music videos to practice and also thinking I could make money doing it while making art in general. Of course, I was wrong.

AMPS: Where do you draw inspiration from to create some of your concepts?
TN: I don’t really get inspired as much as impregnated. Ideas just come to me as if implanted by some other being — fully formed into my brain.

AMPS: Why did you feel it was important for you to make your short film, No Ward, about the New Orleans residents living in Dallas after hurricane evacuation?
TN: All the media about the hurricane made up until that point focused on the physical destruction of New Orleans. I wanted to talk about cultural destruction and psychological destruction in other spaces where there were fewer news crews.

AMPS: What made you comfortable to be in front of the camera for An Oversimplification of Her Beauty?
TN: I had no idea anyone would ever see it. I was working from a space of assumed obscurity.

AMPS: The trailer is very intriguing, could you explain the concept of the film and is the title a reference to under-appreciation or taking little joys for granted?
TN: Yes. It’s more a joke about the fact that you can’t distill the feeling of loving someone into sounds and images.

AMPS: What was your experience like at the Sundance Film Festival last year?
TN: Stressful and beautiful. No one had seen it!

AMPS: I was surprised when I saw their names on the poster. I made the Dallas connection with Wyatt Cenac and the Brooklyn connection from Jay-Z and dream hampton, but Joy Bryant’s involvement is a quandary to me. How did dream hampton, Joy Bryant, Jay-Z, and Wyatt Cenac get involved as co-executive producers with this film?
TN: I have to thank my board of co-executive producers for bringing on even more co execs, specifically, Natasha Logan, Wyatt Cenac, Dream Hampton, and Hank Willis Thomas. All showed the film to influential people and brought bigger names aboard.

AMPS: What are your favorite movies of all time?
TN: They change a lot but, Bamboozled. Killer of Sheep. Dr. Strange love. Eternal Sunshine. Coming to America. Daughters of the Dust.

AMPS: Are there any new movies you are anticipating this year?
TN: Ain’t Them Bodies Saints. Newlyweeds. Mother of George. Afronauts. Oldboy. 1982.

AMPS: How do you feel about the current film industry? Are you a fan of the multiple sequels and remakes?
TN: No. It’s a market focused on white men making as much money as humanly possible – as quickly as possible by arousing white men worldwide with boring stories about white men winning against adversity. I’m bored.

AMPS: What’s the hardest part of being a director?
TN: It’s the most labor intensive thing you can do that does not promise any reward (monetarily, spiritually, ethically, or otherwise.) it allows for no weakness of character.

AMPS: Would you rather your films be released in theaters first or premiered on a streaming media like Netflix?
TN: The Theater is my church.

AMPS: Some have argued that an established director like Spike Lee should not use fundraising or crowdfunding efforts for his latest project, how do you feel about that?
TN: I feel like they should stop hating and go make a movie. To truly answer that question I would have to know their rationale. What is their argument exactly?

AMPS: You have used fundraising before; can you explain the process behind sites like Indigogo and Kickstarter?
TN: You earn every dollar donated. It takes thousands of man hours in marketing and outreach to successfully fund a kickstarter campaign so you earn every dollar. It isn’t free money.

AMPS: With Vine and Instagram on everyone’s phones, do you think most users add to the art of culture with their visuals?
TN: Most? Idk. Most people on my timeline do, but that might only be the culture I move in. Who knows?

AMPS: What’s your advice to eclectic individuals afraid to share their vision through an art form?
TN: Force yourself to do it. There is no formula for overcoming fear. Fear is technically insurmountable — you will always feel it. No matter what day you walk to the coast, the ocean will still be cold, vast, unpredictable, and unforgiving — you gotta just accept that and jump in. Get sick. Drown. Accept that your worst fear will happen. Force yourself to jump. Unfortunately, I don’t know if you can advise will-power or inspire it in someone who doesn’t have it, especially an adult. Some people are lucky, because they have people around them that will force them to jump so I guess surrounding yourself with pushy people could be good if you are fear ridden.

AMPS: What do you hope to accomplish by January 2014?
TN: Nirvana. [Ed. Note: Defined by Webster’s Dictionary as: a place or state of oblivion to care, pain, or external reality; also: bliss, heaven]