AMPS – How long have you been doing stage plays?
Kendrick – I’ve been writing stage plays for about five years now, but I started out writing books; my first book was called, Scares. After I wrote the book and people received it, I said that I was going to give the stage plays a try, so I picked up a pen and wrote my first stage play, Cane and Able: My Brother’s Keeper, which later I changed the title to, Heaven, I Need A Hug.

AMPS – How long have you been producing stage plays?
Kendrick – About four years ago, and the first one was produced in Oklahoma.
Amps – Do you travel with your plays?
Kendrick – Yes, we do travel and it depends on how the promoter wants to do it. We go out anywhere from four to twelve weeks with a show. For the last show, Heaven, I Need A Hug, we started here in Dallas, took it to Houston, Little Rock, St. Louis, New Haven, Connecticut, and Mobile, Alabama just to name a few.

AMPS – How do you find your cast?
Kendrick – Sometimes we will put it on Facebook, send out an email blast or post auditions. We will have people come in and do a quick two minute audition. With some of the actors, we just go after them like 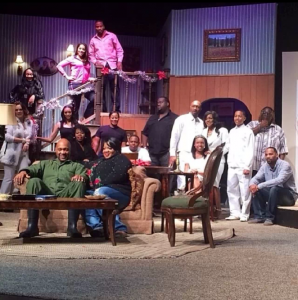 Palmer Williams Jr. and Tony Grant. I’ve been working with Tony Grant for a while; he was in a couple of my other shows. Now if we’re going after a bigger celebrity like Robin Givens or Charlie Wilson, who I had in my last show, then we would use a promoter or a casting agent to go after them.

AMPS – Can you tell us how do you come up with the ideas for the names of your plays?
Kendrick – Well in all honesty, I was driving one day and I was listening to a radio commercial and I think it was the Nutcracker if I’m not mistaken and I actually heard the radio ads run a couple of times and I said to myself, “Wow, you have all these different shows out here but there’s never been a show done for African American people.” So I asked myself, “I wonder what Christmas in the hood would be like.” With the Nutcracker, it’s a different journey but it is more prone to a different lifestyle other then what African American people from the hood are used to and I think everyone wants to see their own life exemplified in some of these shows especially like a Christmas show.

AMPS  – Where are you from?
Kendrick – I was born and raised right here in Dallas, Texas. I went to school in Tyler, Texas at Texas College for a semester then I transferred and went to Lancaster University in Oklahoma where I received a Bachelor’s degree in Science.

AMPS – What can we expect from you in the future?
Kendrick – A whole lot of work (laughing) well Christmas N Da Hood will be performed every year in Dallas. This year was a test market; we wanted to see how well it would be received. Next year, we will build four additional sets and we will do five cities and the year after that we’ll do twelves cities. We are working our way up to thirty-two cities at one time, so it will be thirty-two different casts, thirty-two different sets in thirty-two different cities all running one week at the exact same time.

AMPS – Now that would be awesome.
Kendrick – Yeah, we are trying to be as big as The Nutcracker or A Christmas Carol.

AMPS – What advice would you give to anyone who is trying to get into this business?
Kendrick – Well, I would definitely tell them to keep God first and know that all things are possible through him. Don’t give up and you have to know what you have in you because once you know who you are it would be a lot easier to give yourself to the world. I didn’t know that I had the ability to write until I went through some trials and tribulations of my own so I picked up a pen and said I want to write my story, so I started writing my story. People received that story so well and it dawned on me and I said, “Well if they received it, what if I start writing other things and they receive it?” and they did. I would say to anyone who was inspired to be a playwright that it is a tough business, however if you stay persistent, actually learn the business and become a student of the game then there is a market out there to do some good business.

Pioneer Actress Cicely Tyson Leaves us at the Young age of...

An Oversimplification Of Independent Filmmaking:

My work only allows Internet Explorer, so I have to manually