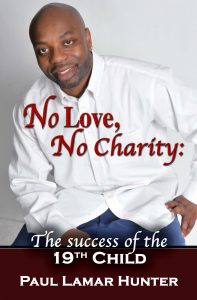 Where are you from? Paul Lamar Hunter was born on October 16, 1970. He was born in Racine, Wisconsin. He is the child of James Senior and Louise Hunter. He is the 19th child out of 21 natural children.

What was your childhood like? Growing up, our household was one of poverty, neglect and total dysfunction. Our mom neglected us while she spent more time at the homeless shelter that she established, than at our home. She instructed older siblings to watch the younger ones while she would do the Lord’s will-taking care of the homeless.

Why did you decide to pursue being an author? He wanted to share his personal experience growing up in a home of dysfunction and chaos at the hands of his mother. Her more than frequent absences led to numerous detrimental results-including when his sister Zollena suffered severe burns and his brother Thomas Hunter died in the house fire in 1976.

Tell be about you latest book? This is the perfect book for all of those who have had to live down shameful family secrets. It’s books like this that help people discover that no matter what you have been through-you can still make it. That’s why interested readers should inform others about No Love No Charity. For each book sold, several lives could be saved.

Due to the success of the book, what is going on with the screen play? The Two Faces of E: Based on a true story: Eloise Edwards, affectionately called Mother Edwards, is a renowned social activist and mother of twenty-one natural children. Over the past 30 years she’s helped many recovered from a variety of indigent issues at the very mission she established. However, though the public lovingly

calls her Mother Edwards, ironically, her own children must call her “E.” The true meaning behind “E” is revealed as Eloise struggles to balance the complexities of being the mother of an amazingly large family, and running a demanding urban mission. As she grapples with maintaining balance between faith and family, Eloise must contend with adversity, tragedy, deaths and murder. Struggling to maintain dignity with the public and her family, Eloise is forced to face the stark reality that there is conflict between her private and public image.

Producers are interested in developing a feature film, and the script has been put in the hands of a producer who has direct contact with Will Packer of Rain Forrest Films and Tyler Perry.

Paul Lamar Hunter has been invited to attend the Bronze Lens Film Festival: Even greater things are in store for Hunter as he has been invited to be on the Red Carpet at the Bronze Lens Film Festival. All of the heavy hitters of the industry will be there, hopefully, Paul will walk away with a deal for this amazing story that’s been covered in Ebony twice (2005 – 2014) and numerous other publications including yours truly AMPS Indianapolis.

He needs financial help to attend the Bronze Lens Film Festival/If people want to sponsor him visit the website www.nolovenocharity.com AMPS readers let’s get in on the action, and help send Paul to Atlanta; this just may be the trip that seals the deal.

What words do you have for others looking at your life and your success? You can’t keep a good person down. No matter what the pedigree from which we come or path that we have walked, always believe in yourself. As Russell Wilson, quarterback of the Seattle Seahawks, quoted from his father when he questioned whether he could excel to greatness, his father said “Why not you.” That’s what disadvantages we face, Speak Big, Dream Big, and never give up!”

Who do you contribute your success to? He contributes his success to his siblings, children and Upper Iowa University staff and faculty. He believes if he can do it, anyone can do it! All you must do-is believe and receive.

What are Your Shout Outs Goals for 2014? My goals for 2014 are to share my story with the world. I look forward to an invitation from President Obama to visit the White House,” stated Hunter in a recent interview. “I also wish to be an invited guest on one of Oprah’s shows, Conan O’Brien, Jimmy Kimmel, Jimmy Fallon, Dr. Phil, GMA, The Today Show, CBS this Morning, World news with Diane Sawyer, The Daily show with Jon Stewart, The View, The Talk, David Letterman, Katie Couric, Queen Latifa, Bethenny Frankel, Chelsea Handler, Ellen Degeneres, CNN news, MSNBC news, BET, Fox and Friends and along with cable news and magazine publications.”

If people would like to help financially, they must send check to:

The Bronze Lens Film Festival in Atlanta starts on October 23 through 28.

Guide how to get Starcoins and Diamonds free at MSP

Five things you may have missed over the weekend