The Soldier, The Dad, The Business Man

AMPS – Where were you born and raised?
Eric- Columbia, Louisiana, a small town outside of Monroe, Louisiana.

AMPS -What was your childhood like growing up in a small town? 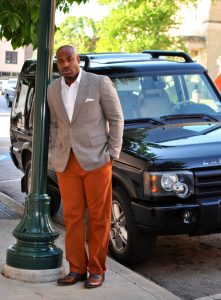 Eric- Growing up in a small town definitely has its advantages/disadvantages. It was a close-knit community. Everybody knew your name and your family. I’m the youngest of four, so if I ever got into trouble, there was always somebody around who would call one of my siblings or my parents.

AMPS – Did you play any sports in school?
Eric- Yes, I was pretty athletic growing up; I played baseball, football, basketball, and I ran track.

AMPS – What did you do after you graduated high school?
Eric- Directly after high school, I joined the United States Marine Corps. It was two weeks after graduation (smiling).

AMPS – Can you tell us a little bit about your experience and why did you choose the Marine Corps?
Eric- It was a great experience. It opened up my eyes to diversity. I grew up in a somewhat segregated town, so it was refreshing to have relationships and meet people that were from places like Idaho, California, Georgia, just everywhere across the map. I traveled all over the world; Spain, Dubai, Kuwait. It afforded me the opportunity to do a lot of exciting things. The Marine Corps was a challenge for me, and I needed to prove to myself that I could do it.

AMPS – How long did you serve?
Eric- I served four years.

AMPS – Why only four years and not make a career out of it?
Eric- Well, I realized that the pick-up-and-go lifestyle is not for me. I mean I was picking up and going every three or four months. It was a rude awakening for me- traveling when you have that type of job you have to be ready to just pick up and go wherever they send you, and I realized that I wouldn’t be able to do that, so I just decided to get out.

AMPS – Are you not a traveling man or you just didn’t like to move around a lot?
Eric- I didn’t like the moving around. I wanted to have a home base, a home port, and in the Marine Corps you never really had a home port. Your home port was wherever they wanted you to go.

AMPS – After you got out of the Marine Corps, where did you go and what did you end up doing?

Eric – Actually, I moved back to Louisiana for about six months, and then I moved to Seattle, Washington; I was there for two years and became interested in fashion.

AMPS – How do you keep yourself in such good shape?
Eric – I work out two or three times a week and try to make healthy food choices.

AMPS – Do you work out to make yourself look good or for your health?
Eric – Well, it’s a little bit of both. I’m so used to being in shape and I’m trying to keep that going, plus I have two daughters and their boyfriends are sometimes a little bigger than me so, I just want them to understand that if there is a situation that arises, that I will handle it. (Both of us laughing)

AMPS – So you have moved back to Texas. What part of Texas do you live in?
Eric – I live in Allen, Texas; some consider it the North Dallas area.

AMPS – What do you do now as far as your career goes?
Eric – I work in business development, merchant services.

AMPS – Do you model or have you done any modeling?
Eric- I did some modeling when I lived in Seattle and I’ve done a little bit here and there in Texas over the years at the Art Institute of Dallas and for product launches.

AMPS – Has any modeling you’ve done been in a commercial?
Eric – No, not video commercials, just some print ads from back in the day.

Amps- So, Eric tell our readers why didn’t you stay with the modeling?
Eric- Well, modeling is great and I like modeling, but once again, it’s a pick up and move situation. You have to go wherever it’s hot. Wherever people want you to be, you have to be. I wanted to settle down and focus on one place. I guess it’s the small town in me.

Amps- Do you have any other projects going on right now?
Eric- Absolutely! I’m always in fashion. I’ve done some personal styling. I’ve also been working on a fashion blog. Stay tuned for that.

AMPS – Will that be here in the DFW metroplex?
Eric- Yes it will. I just want to thank AMPS Magazine for allowing me to be a part of their movement.