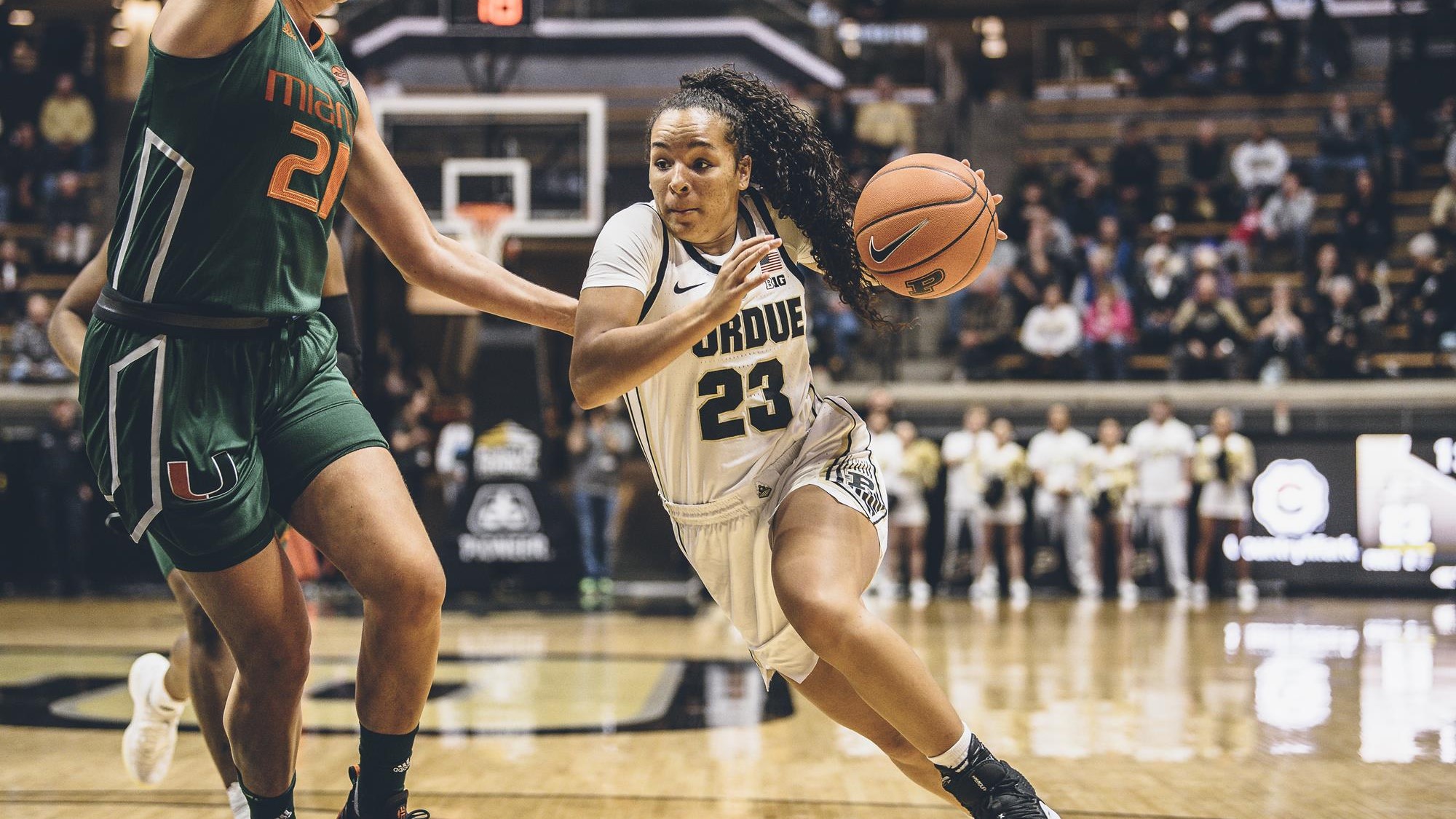 The Boilermakers head into conference play at 9-4

WEST LAFAYETTE, Ind. – The Purdue women’s basketball team used a high-powered opening half to take down previously unbeaten Bradley at Mackey Arena on Friday 74-61. The Boilermakers dropped 52 first-half points on the Braves, winning their second game in three days and finishing the non-conference schedule at 9-4.

Sophomore Karissa McLaughlin led all scorers with 23 points, converting 7-of-14 from the floor and three-of-four from the 3-point line, in addition to five rebounds and four assists. She was a perfect six-for-six at the free throw line, pushing her Big Ten-leading free throw percentage to 91.9 percent on the season (34-37). Joining McLaughlin in double figures were junior teammates Ae’Rianna Harris and Dominique Oden, who tallied 14 points apiece. Harris notched her fifth double-double of the season, adding 13 rebounds and three blocked shots, while Oden splashed a pair of 3’s and had three rebounds.

Freshman Kayana Traylor got close to a triple-double with eight points, eight assists and seven rebounds, and sophomore Tamara Farquhar was shy of a double-double with seven points and nine boards.

Things got going quickly for the Boilermakers as they broke a 10-10 tie near the four-minute mark and finished the opening quarter on a 19-0 run. Seven different players found the bottom of the bucket in the run, while they held the Braves to 4-of-18 shooting, beat them 14-7 on the boards and forced three turnovers in the first.

The second quarter featured more hot shooting for the Old Gold & Black, cashing in 10-of-13 tries including seven points from Oden and five from McLaughlin. Purdue’s lead swelled as high as 26 points in the opening half as the Boilermakers had their highest-scoring first half in 10 seasons, last scoring 52 at Hawaii on Nov. 29, 2008.

The Boilermakers got the first two buckets of the second half, pushing their lead to 56-31, but foul trouble sent Oden and McLaughlin to the bench and the Braves took advantage. Bradley reeled off a 12-0 run, while the Boilermakers went ice cold from the field, hitting only 3-of-18 in the third. The Braves continued to cut into the lead in the fourth quarter, drawing to within seven points twice, but the Boilermakers dug in defensively and made the most of their opportunities at the free throw line to seal the win.

Sophomore Gabi Haack led the Braves in scoring with 22 points, including three 3’s, while junior Chelsea Brackmann had a double-double with 12 points and 12 rebounds. Bradley was one of 11 remaining undefeated schools left in the nation heading into Friday’s game.

Your Thoughts on Beyonce’s ‘BLACK IS KING’ Visual Album….