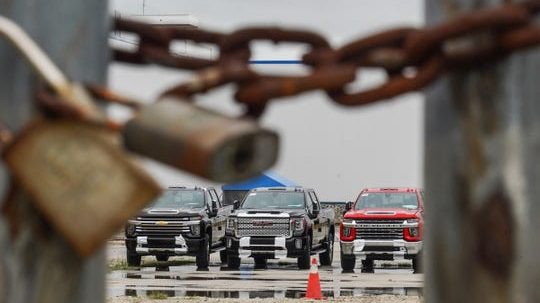 GM is entering week five of a national strike affecting 55 company sites in 10 states. The UAW represents 46,000 GM workers, 55,400 Ford workers and 47,400 Fiat Chrysler workers, according to company websites. GM employs the most people in the United States among the Detroit Three. Prior to the contract talks that costs must be contained and health care was a high priority.

Temporary workers make up 7% to 10% of GM’s workforce over the course of a year, accounting for about 4,100 workers at the end of 2018. Ford had about 3,400 temps at year’s end, and Fiat Chrysler Automobiles had 4,800, the UAW said. Temp workers don’t get vision or dental benefits and have deductibles.

After a contract with GM is ratified, the union will focus on negotiating a deal with the other two Detroit companies. One upside of being the target chosen by the labor union to go first during collective bargaining means GM sets the pattern for key issues such as wages, health care and temporary workers in the four-year contract. 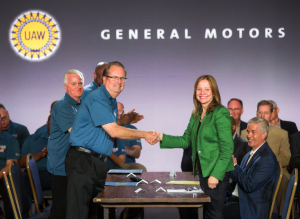 The United Auto Workers union said Saturday it will boost strike pay for 48,000 hourly workers at General Motors Co (GM.N) by $25 a week to $275 as a strike against the largest U.S. automaker nears the end of its fourth week.

Details of a revised GM contract offer emerged, with a person briefed on the matter confirming that GM had boosted its proposed ratification bonus by $1,000 to $9,000.

GM has proposed 3% pay raises in the second and fourth year of the four-year-contract and 3% and 4% lump sum payments in the first and fourth year respectively, the person confirmed. The company would agree to make temporary workers permanent with three years of service and they would get a $3,000 bonus upon ratification of the contract.

The UAW strike began on Sept. 16, with the union seeking higher pay, greater job security, a bigger share of profit and protection of healthcare benefits. Credit Suisse estimated the loss could hit about $1.5 billion, and the Center for Automotive Research estimated the weekly costs to GM and the UAW strike fund at $450 million and $12 million, respectively.

As part of its revised offer, GM boosted the amount it plans to invest in the United States to about $9 billion from its previous offer of $7 billion, a source familiar with the offer said.

One of the five issues still under discussion is the fate of four U.S. factories that GM has indicated could close.

Finally, the union made an offer that it described as “comprehensive” and said it could lead to a tentative settlement provided GM accepted it. GM didn’t and the two sides remained deadlocked and talks are scheduled to resume today.

Instead the union went ahead with another “Solidarity Sunday” to underscore its determination to continue the strike, which is now the longest walkout at GM since an epic strike in 1970.

In a surprise move, the UAW also launched a strike, involving 3,600 union members against Mack Truck, heavy truck make that belongs to AB Volvo and sounded many of the same themes that have echoed through the GM strike, which began Sept. 26.