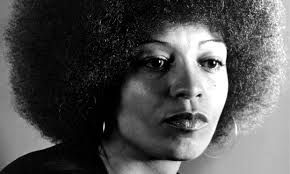 Angela Yvonne Davis (born January 26, 1944) is an American political activist, scholar, and author. She emerged as a prominent counterculture activist and radical in the 1960s as a leader of the Communist Party USA, and had close 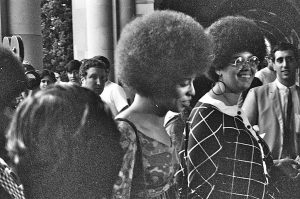 relations with the Black Panther Party through her involvement in the Civil Rights Movement. Her interests include prisoner rights; she founded Critical Resistance, an organization working to abolish the prison-industrial complex. She is a retired professor with the History of Consciousness Department at the University of California, Santa Cruz, and a former director of the university’s Feminist Studies department.

Davis was born in Birmingham, Alabama. The family lived in the “Dynamite Hill” neighborhood, which was marked by racial conflict. Davis was occasionally able to spend time on her uncle’s farm and with friends in New York City. Her brother, Ben Davis, played defensive back for the Cleveland Browns and Detroit Lions in the late 1960s and early 1970s. Davis also has another brother, Reginald Davis, and sister, Fania Davis Jordan.

Davis attended Carrie A. Tuggle School, a black elementary school; later she attended Parker Annex, a middle-school branch of Parker High School in Birmingham. During this time Davis’ mother, Sallye Bell Davis, was a national officer and leading organizer of the Southern Negro Youth Congress, an organization heavily influenced by the Communist Party. Consequently, Davis grew up surrounded by communist organizers and thinkers who significantly influenced her intellectual development growing up.

Davis was an acting assistant professor in the philosophy department at the University of California, Los Angeles (UCLA), beginning in 1969. Although both Princeton andSwarthmore had expressed interest in having her join their respective philosophy departments, she opted for UCLA because of its urban location. At that time, she was known as a radical feminist and activist, a member of the Communist Party USA and an associate of the Black Panther Party.

Davis has written several books. A principal focus of her current activism is the state of prisons within the United States. She considers herself an abolitionist, not a “prison reformer,” and has referred to the United States prison system as the “Prison-industrial complex“. Davis suggested focusing social efforts on education and building “engaged communities” to solve various social problems now handled through state punishment.

Davis was one of the founders of Critical Resistance, a national grassroots organization dedicated to building a movement to abolish the prison-industrial complex. In recent works, she has argued that the prison system in the United States more closely resembles a new form of slavery than a criminal justice system. According to Davis, between the late 19th century and the mid-20th century the number of prisons in the United States sharply increased while crime rates continued to rise. During this time, the African-American population also became disproportionally represented in prisons. “What is effective or just about this “justice” system?” she urged people to question.

Publishing Great britain Essays in how to obtain an A