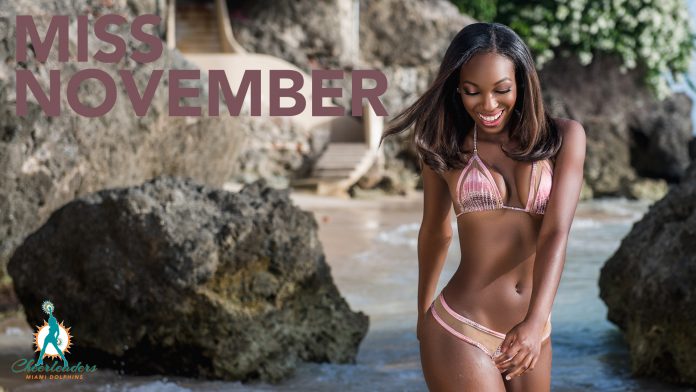 The show opened with a Dolphins-themed segment, showcasing the cheerleaders in aqua and orange and a creative display of football equipment. That was followed by colorful fringe in a fun and flirty scene. The fashion show then showcased a battle between fire and ice – with a live performance by Joe Reynolds &amp; Danny Pietrafeso with the ladies walking the runway to the soothing music of John Mayer covers. A beautiful ice ballerina was quickly engulfed in a dance battle with fierce fire dancers to unleash the fire models.

In the next scene, spectators were entertained by a TwiinBotz robot performance that danced with the cheerleaders to introduce a futuristic theme. The ladies were body painted head to toe in shattered metal, screws and robotics-inspired body paint by the Makeup Mob walking to techno beats with lasers filling the room. In honor of the inaugural International Auditions this year, eight countries the team represents were introduced wearing their countries colors and proudly waving their flag.

Following the conclusion of the fashion show, the 2017 calendar months were displayed, culminating with the 2017 cover unveil to the public for the first time. Miami Dolphins Cheerleader Monica has the honor of being the 2017 cover girl, a distinguished third consecutive year she has been featured on the cover.

The 2017 calendar was shot on the island of Barbados. The 2017 calendar can be preordered prior to the unveiling through www.DolphinsCheerleaders.com , and will ship in mid-October. The cost of the calendar is $18.00, plus shipping.

One of the most visible entertainment groups in all of professional sports, the Miami Dolphins Cheerleaders have traveled to more than 30 countries on five continents over the past decade and continue to be an iconic and international face of NFL Cheerleaders. The cheerleaders are on the sidelines for all home games and are extremely active in the community; visiting schools and hospitals, as well as charity and corporate events.

The future steps of Scala – What to expect from upcoming...