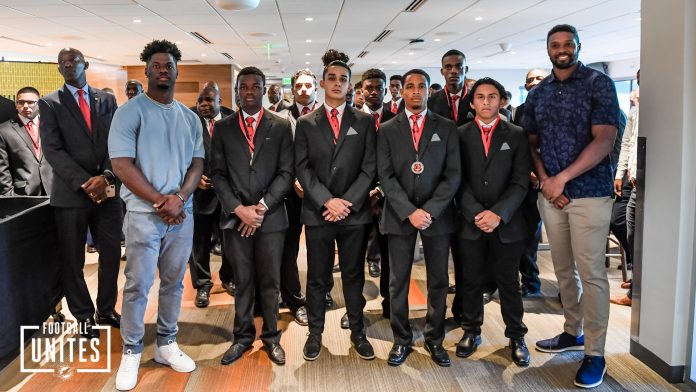 Miami – The Miami Dolphins FOOTBALL UNITES™ program partnered with the 5000 Role Models of Excellence Project to host the Wilson Scholar Academic Signing Ceremony at Hard Rock Stadium. At the event, 47 Wilson Scholars announced and signed with the colleges they will be attending in addition to receiving computers for their academic studies on Tuesday, May 28. Miami Dolphins players Jerome Baker and Jonathan Woodard were in attendance to commemorate the second Academic Signing Ceremony that the Miami Dolphins have hosted as part of a long-term partnership with the 5000 Role Models of Excellence Project through FOOTBALL UNITES™.

This event is a follow up to the FOOTBALL UNITES™ Police and Youth Conference in which hundreds of high school students of the 5000 Role Models of Excellence Project joined law enforcement from jurisdictions throughout South Florida in a conference setting designed to promote positive interaction between youth and law enforcement.

“We are honored to be part of this event with the 5000 Roles Models of Excellence Project that celebrates, supports and recognizes our South Florida youth,” Miami Dolphins Senior Vice President of Communications & Community Affairs Jason Jenkins said. “The Miami Dolphins Organization has a strong commitment and investment toward education and we are utilizing our platform to impact and inspire these young men as they embark on their journey to college.”

As part of the organization’s goal to level the playing field through the power of teamwork to inspire a healthier, more educated and united South Florida community, the team tapped 5000 Role Models of Excellence as one of its 2019 community partners and programs for FOOTBALL UNITES™. Through continued preexisting programming in addition to incorporating 5000 Role Models of Excellence into FOOTBALL UNITES™ programming, these social justice initiatives have impacted over 10,000 role model youth.

The team’s social justice initiative of FOOTBALL UNITES™ has a goal to be inclusive of the diversity and aware of the intersections that make up South Florida, uniting groups of different races, genders, sexual orientations, identities, abilities and faith around the power of football. These programs connect to the NFL’s Inspire Change platform, showcasing the collaborative efforts of players, owners and the league to create positive change in communities across the country and work with RISE – the Ross Initiative in Sports for Equality — to eliminate racial discrimination, champion social justice and improve race relations.