Years after then-presidential hopeful Barack Obama declared “America failed the people of New Orleans and the Gulf Coast,” he returned to the city to hail Hurricane Katrina recovery efforts and highlight the region’s resilience in the face of massive devastation.

“I’m here to hold up a mirror and say because of you, the people of New Orleans working together, this city is moving in the right direction and I have never been more confident that together we will get to where we need to go,” the president said at a speech Thursday afternoon at the Andrew P. Sanchez Community Center in Lower Ninth Ward of New Orleans, Louisiana. “You inspire me.”

President Obama praised the hard work of the local community in the wake of the storm, saying that their efforts inspired not only him, but the rest of the nation.

“Folks have been watching what happened here and they’ve seen a reflection of the very best of American spirit,” he said.

Earlier, the president met with residents who are working to rebuild their neighborhoods as part of the 10th anniversary of Hurricane Katrina. He visited the community center in the Lower 9th Ward, a predominantly African American neighborhood especially hard hit during Katrina. 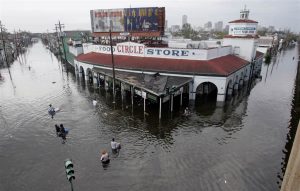