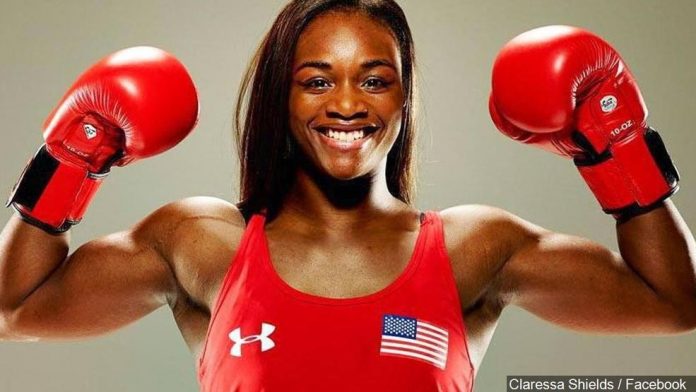 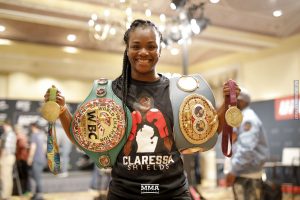 Weight class: Middleweight/165 lbs
Hometown: Flint, Michigan
Birthdate: March 17, 1995
Height: 5-9
Began boxing: At age 11 after hearing about Laila Ali from her father
The baby of the team: Claressa won the Olympic Trials at 16 and was 17 when she won Olympic gold
History maker: Claressa won the first-ever Olympic gold medal in the middleweight division, becoming the first American female to become an Olympic champion
Youth over experience: Claressa defeated an opponent nearly twice her age in her final bout at the Olympic Games to win gold.
Did you know:

Seventeen-year-old Claressa Shields enjoyed an eventful summer prior to starting her senior year in high school. The Flint Northwestern High School senior made history simply advancing to the London Games, the first-ever in the sport of women’s boxing. The event was a culmination of years of work for she and her lifetime trainer, Jason Crutchfield, but just earning a berth at the Olympic Games wasn’t enough for this teenager. She wanted nothing but gold and with three strong wins in London, she accomplished her goal.

Shields took up boxing as an 11-year-old after hearing her father talk about Laila Ali. She initially thought he wanted her to box but quickly learned after asking for his permission that he wasn’t exactly keen on the idea. He eventually came around after a family vote with Shields’ stepmother, and she’s been a force to reckon with ever since.

A proud Flint native, Shields wanted badly to bring something positive to her hometown, which hasn’t had much to celebrate recently. She understands the importance of being a role model to the young people in her community and has been overwhelmed by the unbelievable outpouring of support she has received since returning from London with her gold medal.

She was welcomed at the airport by over 500 well-wishers and can’t go anywhere in her hometown without being stopped for photos and autographs and she refuses to disappoint anyone. Since returning from London, she has had quite the schedule. The 17-year-old has been honored on the floor of the Michigan State Senate, introduced Vice President Joe Biden, and presented the Liberty medal to boxing icon Muhammad Ali. She attempts to fulfill every autograph and picture request but is still adjusting to everything that comes with her success.

Shields became the first member of her family to graduate from high school in 2013.