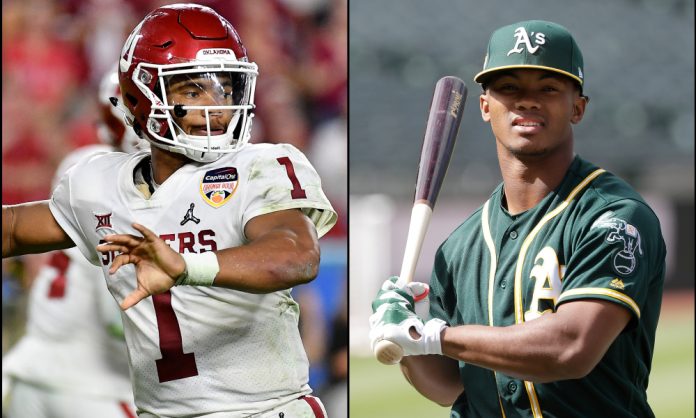 Oklahoma’s Heisman-winning quarterback will forfeit a baseball contract worth millions to join the NFL. Kyler Murray was guaranteed the 20-year-old center fielder nearly $5 million as a signing bonus and would allow him to play footballwhile in College at University of Oklahoma. He was the ninth overall pick.

If that was not enough he was picked as the #1 overall draft pick for the 2019 NFL draft. Murray could become the first athlete ever to be drafted in the first round of both sports

“For me, it was something I’ve known for a while,” Murray said of his football plans. “That organization, being with the A’s, was the best possible situation for me just because they were so great throughout the football season, kind of leaving me alone and letting me do my own thing, and at the same time letting me know how much I meant to them and that type of stuff. Telling them was tough.”
http://www.espn.com/video/clip?id=26062867

Kyler Murrey repeated Baker Mayfield’s accomplishment in 2018, winning the same trophy after an outstanding junior season. The first-team Associated Press All-American and Player of the Year, Davey O’Brien Award winner, Big 12 Offensive Player of the Year and finalist for the Maxwell Award played in all 14 games with 13 starts (he did not start against Baylor because he was late for practice). He ranked in the top five nationally in passing efficiency (199.2), passing yardage (4,361), passing touchdowns (42, against just seven interceptions), and rushing yardage by a quarterback (123-1,001-7.3, 12 TD). He became the second quarterback in FBS history (Deshaun Watson, 2015) to throw for 4,000 yards and rush for 1,000 yards. Murray signed with Texas A&M out of high school, following his dad’s footsteps to play quarterback there (Kevin set many school passing records there in the mid 1980s). Kyler was a five-star recruit and top 50 overall prospect from Allen High School in Texas who went 43-0 as a starter, totaled 14,500 yards of offense, and won the National Gatorade Player of the Year after his senior year from multiple outlets. He played in eight games for the Aggies as a true freshman, making three starts (72-121-59.5, 686 yards, five TD, seven INT passing; 53-335-6.3 rushing). After the season, he joined fellow passer Kyle Allen in transferring out of a struggling Texas A&M program. He decided on Oklahoma, sitting out the 2016 season there as a redshirt. Murray played in seven games behind Mayfield in 2017, starting one contest (18-21-85.7, 359 yards, three TD, no INT). He was the ninth overall pick in the 2018 Major League Baseball amateur draft, selected by the Oakland A’s, who presented him with about $5 million in signing bonus. Murray played outfield and hit cleanup for the Sooners’ baseball team in 2017, batting .296 with 10 homers and 47 RBI. Murray’s dad played minor league ball, as well, and his uncle, Calvin, played outfield in the majors.

Welcome back the FLORIDA CLASSIC to Orlando

The History of Refuted