With their victory in Super Bowl 50, the Broncos are the ninth franchise to win as many as three Super Bowl championships.  This was the eighth Super Bowl appearance for the Broncos, matching the record also shared by the Patriots, Steelers and Cowboys.

The second overall selection in the 2011 draft, Miller became the 10th defensive player in Super Bowl history to be selected as the Super Bowl MVP by harassing the first overall pick in that draft, quarterback Cam Newton of the Panthers.  Miller had 2.5 sacks, 6 total tackles, 2 forced fumbles, 2 hurries and a pass defensed.  The other three linebackers to be chosen Super Bowl MVP are Chuck Howley of the Cowboys (Super Bowl V), Ray Lewis of the Ravens (Super Bowl XXXV) and Malcolm Smith of the Seahawks (Super Bowl XLVIII).

With his victory in Super Bowl 50, Peyton Manning, at age 39, becomes the oldest starting quarterback to win a 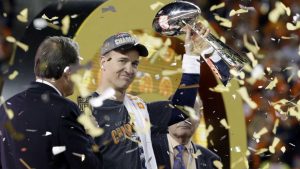 Super Bowl.  He eclipses the previous record held by Broncos GM John Elway who was 38 when he won Super Bowl XXXIII to complete the 1998 season.

With the win, Manning became the first NFL quarterback with 200 career wins (186 regular season and 14 postseason).  He had been tied with Brett Favre, a member of the Pro Football Hall of Fame Class of 2016, with 199.

The 61-yard punt return of Jordan Norwood in the second quarter was the longest in Super Bowl history.  John Taylor of the 49ers had held the mark since Super Bowl XXIII with a return of 45 yards.

Although it was the Broncos with seven sacks, it was a member of the Panthers, Kony Ealy, who tied the individual sack record with three sacks.  He now shares the mark with Reggie White of the Packers in Super Bowl XXXI and Darnell Dockett of the Cardinals in Super Bowl XLIII.

With Denver`s win today, the teams wearing white jerseys have won 11 of the last 12 Super Bowl games.  It is a run that began with the Patriots win over the Eagles in Super Bowl XXXIX (the Packers in Super Bowl XLV are the exception).

Teams scoring first are now 34-16 in the Super Bowl as the Broncos started the scoring with a field goal.

The Panthers had trailed at halftime only twice in 18 previous games this season, and on both previous occasions by just three points.  The six-point halftime deficit was their biggest of the year.

The Broncos set an NFL record (for an extended season) with 11 wins by 7 or fewer points.  Their 14-point margin in Super Bowl 50 equaled their second-largest of the season (vs. Green Bay +19, at San Diego +14).

The Broncos gained only 194 yards in today’s win, the fewest for a victorious team in a Super Bowl.  The previous low was 244 yards by the Ravens in their win over the Giants in Super Bowl XXXV.

The Broncos were the sixth team to win a Super Bowl without throwing a touchdown pass.  The Broncos, in Super Bowl XXXII, the first of John Elway’s two Super Bowl champions, were the last team to do so.

Peyton Manning’s 141 passing yards represent the second-lowest total of his 27 postseason games.  He had 137 in a loss for Indianapolis to the Jets in a Wild Card game on January 4, 2003.

If this is the final postseason game of for Manning, he will end it second to Tom Brady (7,957) in career postseason passing yards with 7,339.  Manning is also second to Brady with 649 postseason completions and 1,027 pass attempts.  He is 4th behind Brady, Joe Montana and Brett Favre with 40 passing TDs.

Manning wins his second Super Bowl championship nine years after his first for the Colts in Super Bowl XLI.  Only Tom Brady, XXXIX and XLIX, had a longer gap as a QB with 11 years.

Elway is the first Super Bowl-winning QB to also win a Super Bowl ring as a GM.

Kubiak became the fourth coach to win a Super Bowl in his first year as the head coach of that team.  The most recent was Jon Gruden of the Buccaneers in Super Bowl XXXVIII.  The others are Don McCaffrey of the Colts in Super Bowl V and George Seifert of the 49ers (over the Broncos) in Super Bowl XXIV.

The Panthers were held to 10 points, their lowest total of a season in which they led the NFL in scoring.  They had reached 20 points in all but one of their 18 games (13 in their lone regular season loss to Atlanta in Week 16).

The seven sacks suffered by the Panthers in Super Bowl 50 (six of Cam Newton, one of Ted Ginn, Jr.) were the most they had allowed this season.  So, too, were the four turnovers.

The Panthers did extend their streak of consecutive games with 100+ yards rushing to 32 (regular season plus postseason).