The Florida Classic is more than just a football game and more than an in-state rivalry. It is now the nation’s largest football game between two Historically Black College/University (HBCU) schools, surpassing the Bayou Classic between Grambling and Southern in New Orleans as the top attended game in NCAA Division I-AA. Since its inception in 1978, the game has now seen over 2 million spectators attend the game (2,048,378). 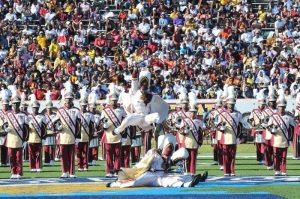 A Sunshine State rivalry dating back nearly a century and an Orlando institution for 24 years and counting, the Florida Blue Florida Classic is more than just nation’s largest annual HBCU football game — it’s a celebration of sports, family, music and culture that is woven into the fabric of Central Florida.

The first matchup between Florida A&M University and Bethune-Cookman University took place in Tallahassee in 1925. Through 74 meetings thus far, the Rattlers hold a 50-24-1 series lead, thanks in large part to FAMU’s early success — including a run of 25 wins in 26 games between 1930 and 1972, the final game in that stretch serving as the final meeting at Welch Memorial Stadium in Daytona Beach.

By that time, the event had outgrown the teams’ respective home stadiums, and during the early- and mid-1970s, organizers held the game at multiple venues throughout the state, including Doak Campbell Stadium, Daytona International Speedway and Camping World Stadium — then known as the Florida Citrus Bowl, coming on the heels of a major expansion, in 1976 — in search of the right host.

Eventually, the schools agreed on a permanent location, and in 1978 the “Florida Classic” was officially born, with Florida A&M and head coach Rudy Hubbard (a former Woody Hayes assistant) helping his team turn a 17-0 halftime deficit into a 27-17 win in the premiere game, a victory that ultimately proved critical during the Rattlers’ run to the inaugural NCAA Division 1-AA title.

But it wasn’t until the game returned to Orlando for good in 1997 that the rivalry truly found its perfect fit — as evidenced by the 56,351 fans in attendance for Orlando’s first “Classic,” more than 25,000 more than the previous year in Tampa.

In the years since, the move up I-4 has proved to be a boon for both universities, as well as The City Beautiful, with more than 1.3 million game attendees passing through the turnstiles over the past two decades, an average of more than 60,000 fans per game. Since the rivalry put down roots in Orlando, B-CU holds a 13-10 advantage in the series, with each game seemingly more thrilling than the last.

In addition to the star power on the gridiron — with such names as Rashean Mathis, Nick Collins, Eric Weems and Quinn Gray dotting rosters since the move to Orlando — FAMU’s Marching 100 and B-CU’s Marching Wildcats always provide the perfect soundtrack for Classic weekend with their memorable halftime performances, while the pregame FanFare outside the stadium offers a tailgate experience unlike any other.

A cross between a family reunion, a can’t-miss music festival and an action-packed game, the Florida Blue Florida Classic has grown from a fierce small-school rivalry to a nationally-televised, must-see spectacle in Central Florida. And with a centrally-located, first-class venue playing the role of host to these historic institutions, the future of the Classic is ripe with promise.

Join us as we kick off the Florida Blue Florida Classic weekend with an evening of fun celebrating Florida A&M University and Bethune-Cookman University.

During this VIP event, we will recognize select individuals for their contributions to the game, the Florida Classic Consortium, and both historic institutions.

Before Battle of the Bands – The Florida Blue Florida Classic Diversity Job Fair takes over the Amway Center. Over 125 employers, 6,000 jobs, career sessions, resume review and more will be available at the job fair and career expo. This is the largest Diversity Job Fair in Florida. Full information can be found at the link below.

The Classic weekend gets started with players, pep bands, university officials and student leaders gathering to celebrate the season, preview the upcoming matchup and show that Rattlers and Wildcats remain divided on the field but united in the world. Individual tickets are $55 (including lunch) while a table of 10 (including lunch) is $550.

Florida Blue Battle of the Bands