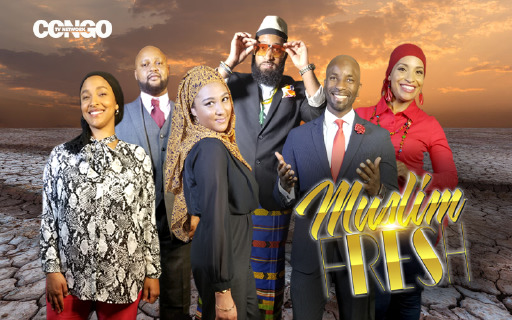 Reality TV has it’s fans as well as critics but usually the critics are not against the reality style of programming. They are most commonly against the questionable conduct on many of the shows. Eagle View Media Company, managers of Congo TV Network, have taken Reality TV into a much more respected direction. With shows like Chosen Generation, Slay The Prom, and several others… the media company continues to set a new standard for the quality of Reality TV programming.

This Fall, Congo will take a huge leap by airing the country’s first full Muslim cast Reality TV Show. The show, Muslim Fresh, begins filming this Summer in New Orleans, LA.  It will follow the lives of three young Black Muslim couples to show the world the sacredness of their culture, family, principals, and the struggles they face being Black and Muslim in America.

The cast is led by Asad El Malik and his wife, Adrienne Warren. Malik actually came up with the name ‘Muslim Fresh’. He and longtime friend, Ro Wright, have worked together in the past organizing programs throughout New Orleans to bridge the gaps between race and religion in the New Orleans Metro area. “When we came up with the idea to do the show I told our team I knew exactly who to call,” said Ro Wright, Director of Programming for Congo TV Network.

Malik and Warren have been married for 9 years. They are busines owners and leaders in the Gentilly community of New Orleans. “We hope to show Muslims in a positive light… to show the world that we deal with the same things all families deal with,” said Malik.

Malik and Warren will be joined by Rasheed Salahuddin (Social Media Branding & Connecting) and Cheryl Salahuddin (Educator). The Salahuddins have been married 8 years and they live on the New Orleans Westbank. “We’d like to help people understand that a Muslim is one who wants for others what he wants for himself. We want sucess, happiness & Prosperity for all mankind,” explained Salahuddin.

Also joining the cast will be popular New Orleans Chef Corey Lemelle and his wife, Terri Martin-Lemelle (Student/Homemaker). They reside in New Orleans East and they’ve been married 8 years as well. Chef Corey told Congo TV, he and his wife were interested in being part of the show because they wanted people to know they are just “Black folks trying to live without compromising our belief in our Creator”.

EVMC is very excited about this show and they are set to begin filming in July. “It kind’a shows you how dedicated we are to sharing the complete Black culture with our viewers,” said Ro Wright, who is actually a Christian minister. “People tend to think we are so different but we actually have much more in common than people realize,” said Wright. “I respect their Faith and I think it’s important the world understands how disciplined Muslims are and how much they go through to be respected in this country. Love isn’t supposed to obey our limitations,” he explained.

Expect a lot of laughter, a lot of food, houseparties, family adventures, some of the best fashion you’ll ever see, and many opportunities to understand the Muslim Faith. “The Muslim Faith has become more and more engaged by young African-Americans because they are attracted to the messages and practices of the Faith. As a network, this is an untapped audience and one we hope to attract by giving them a program they can be proud of,” said Wright.

Expect surprise celebrity appearances and more when the show airs this Fall on the Congo TV Network.