World-renowned opera singer and Indianapolis native Angela Brown will sing “God Bless America” during pre-race ceremonies for the 101st Running of the Indianapolis 500 presented by PennGrade Motor Oil on Sunday, May 28, a beloved patriotic tradition of “The Greatest Spectacle in Racing.”

“Excited doesn’t begin to describe how I feel about singing ‘God Bless America’ at the 101st Running of the Indianapolis 500,” Brown said. “Ever since I was a young girl, growing up in Indianapolis, I have dreamed of being a part of this time-honored tradition. I am proud to be able to salute the men and women who have sacrificed so much for our country. This is truly a dream come true!”

Her highly successful Metropolitan Opera debut in the title role of “Aida” captured instant attention from international print and broadcast media and catapulted Brown onto the world’s prestigious opera and symphonic stages. Headlines from 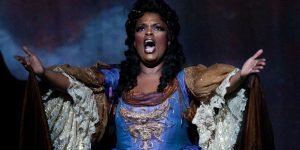 The New York Times read, “At last an Aida,” and “CBS Weekend News” proclaimed, “The future of opera has arrived!” followed by features on the front page of The New York Times, on CNN, in Oprah Magazine, Essence Magazine, Ebony Magazine, Classical Singer, Reader’s Digest and Psychology Today.

While opera is the main catalyst for her career, Brown’s performance experience includes everything from star hostess on stage to producer and creator of “Opera…from a Sistah’s Point of View,” an inspired show that has gained notoriety for bringing opera to the masses in the form of an edgy, yet educational, concert presentation.

“Angela is a tremendous talent and will sing a fantastic rendition of ‘God Bless America’ for our fans,” Indianapolis Motor Speedway President J. Douglas Boles said. “As a Hoosier, she knows just how much the Indy 500 means to all of us, and this performance will be extra special for her.”

Earlier career high points for Brown include her collaboration with American composer Richard Danielpour. Her early success as Aida was immediately followed by world-premiere performances of Danielpour’s opera “Margaret Garner” in the role of Cilla with Opera Philadelphia, Cincinnati Opera and Michigan Opera Theater. The result was a triumph that led Danielpour to set the poetry of visionary Maya Angelou for Brown’s voice in an orchestral song cycle, “A Woman’s Life,” co-commissioned by Pittsburgh Symphony and Philadelphia Orchestra, recorded in 2012 with the Nashville Symphony and released on the Naxos label in 2013.

A 1997 National Metropolitan Opera Council Auditions Winner, Brown received her bachelor of music degree in voice from Oakwood University in Huntsville, Alabama, where she studied with Ginger Beazley. She attended the Indiana University School of Music as a student in the studio of Virginia Zeani. Ms. Brown received the Indiana University African American Arts Institute’s inaugural Herman C. Hudson Alumni Award in 2006, given annually to recognize outstanding contributions made in the arts by former members of the Institute.

Brown is featured in “Nineteen Stars of Indiana,” a book by Michael S. Maurer about 19 living Hoosier women with successful and inspirational life stories, released by Indiana University Press in December 2008. She is a proud recipient of the Indiana University Distinguished Alumni Service Award, the Governor’s Arts Award from the Governor of Indiana, a Spirit of the Prairie Award from Conner Prairie in Indiana and a member of the Indianapolis Public Schools Hall of Fame.

Visit IMS.com to purchase tickets for the 101st Indianapolis 500 Presented by PennGrade Motor Oil on Sunday, May 28, and for more information on the complete Month or May schedule at IMS.