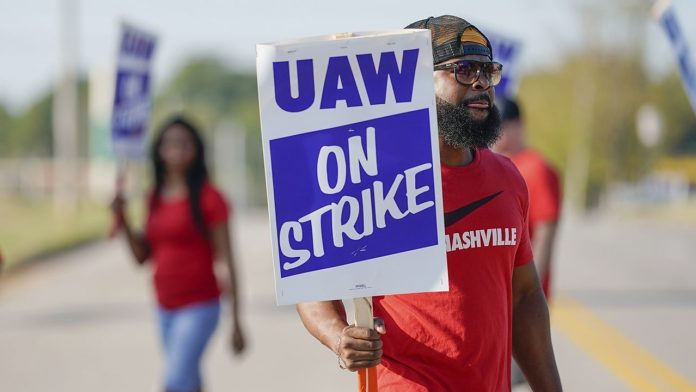 Last night at Midnight the United Auto Workers (UAW) went on a national strike due to GM failures, affordable healthcare for thousands remain unsettled for no good reason, fair wages, and job security to name a few reasons.

The United Auto Workers has this Slogan, “UAW TO GM: WE STOOD UP FOR YOU, NOW WE STAND UP FOR US.”

Local Union leaders from across the nation met Sunday morning after the 2015 General Motors collective bargaining agreement expired Saturday night and opted to strike at midnight on Sunday.

The autoworkers are calling on the Big 3 automaker to recognize the contributions and sacrifices that the company’s UAW members have made to create a healthy, profitable, industry.

“We stood up for General Motors when they needed us most. Now we are standing together in unity and solidarity for our Members, their families and the communities where we work and live,” said UAW Vice President Terry Dittes.

Following a formal meeting of the GM Council consisting of local union leaders, the UAW announced he membership is going on strike at midnight Sunday to secure:

The decision to strike comes a day after UAW Vice President Terry Dittes notified General Motors leadership that the Union would not agree to extend the Collective Bargaining Agreements.

“We told UAW GM members that we would stand up for them and their future,” said Gary Jones, President of the UAW.