Norris J is a product of inner city Fort Worth, Texas. Born on November 9, he is the second oldest of four children. While growing up in a divorced family, he battled and conquered various challenges of an urban environment faced by teens such as low or no self-esteem, the desire to be accepted, as well as, desperation to fit in, s 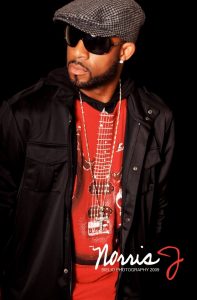 treet life, and peer pressure.
Music offered an opportunity of self-expression and an outlet to escape his immediate surroundings. His attraction and love for hip-hop provided a release and positive niche for embedded creativity. In high school he was an athlete with a passion for basketball, but his dreams and aspirations of professional pursuit never materialized.
Norris J was led to the Lord at an early age through the Church of the Living God PGT. Even though he was raised in a single parent home, he was avid in his Christian surroundings and cultured hip-hop as a dialogue to communicate his views. Norris started writing in 1999 while being part of a duo entitled “XFactor”. Norris went solo in 2008 and his passion to write inherently increased.
In an innovative effort to focus on issues still escalating in the community, INJ Music was created to foster mental notes & demographics involving inner city malfunctions among youth and young adults. Norris J is a stage pioneer and front runner combining inspirational lyrics and hip-hop style to communicate resolution to emotions and situations that demand attention. With acceptance of hip-hop and positive flow of lyrical rhetoric combined with Norris J’s swag and charisma, the INJ Movement emerged. His style is very relevant to pop culture, but the main focus is on praising God. His music includes high-energy praise tunes that make you want to get up and dance, to mid-tempo songs that can transition you into worship. Although his music is geared toward our youth, it touches the lives of anyone in need of encouragement through a positive message. His passion is to be a voice for a young generation that will meet them where they are and introduce them to Christ through Hip-Hop music.
Norris J. currently resides in the Dallas/Fort Worth metroplex where he is the devoted husband and father to his wife and three children. He is a deacon and faithful member of New Breed Christian Center in Fort Worth, TX under Pastors Darrell and La’Tonja Blair.
Norris J has a sincere passion to uplift spirits, redirect knowledge to insight better choices, and energetically praise the Lord. NJ delivers electrifying performances as he empowers his audience with words of wisdom and scripture while engaging them with music they can relate to. He is developing quite a resume of attractions by being accepted and admired by multiple venues including gospel and secular audiences.

Amps- Norris can you tell us how old you were when you discovered your gift?
Norris J.-I was around twenty seven years old I was a late bloomer as far as rap hip hop. A friend of mine pretty much pulled it out of me while I was hanging around the studio.

Amps- Have you always liked to rap?
Norris J- It was never a dream of mine to be a hip hop artist, I always wanted to be a basketball player until I discovered that I had a gift to be an artist and it was completely designed by God for me to be doing what I am doing today. It was anything I planed or anything I ever dreamed of doing.

Amps- Where were you born and raised?
Norris J- I was born in Forth Worth Texas grew up there but when I got a little older I moved to Dallas.

Amps- What are some of your goals where do you see yourself five years from now?
Norris J- In five years I would have built up INJ music just like I have Norris J the artist so I pretty much planning on sitting back being a record executive for INJ music and training and developing other artist. Also having a studio with other artist under the INJ music group.

Amps- Are there any projects that you are working on right now?
Norris J- Yes, I’m working on a tone of projects I’m working on my own project that I am completing as we speak I’m going into the studio to do my first co-write song with BET Sunday’s best runner up Andrea Helms. I just finished another single with Kisha Grant Alexis who is former member of Kirk Franklin and the Family. I’ll be in the studio soon to help do a verse on a single released by Terrance Mackey out of Dallas.

Amps- If you had the opportunity to go back and change something in your past what would it be?
Norris J- I would have stayed in college and got my degree and really gotten myself educated, but if I would have know that I would have taken this path today I would have defiantly went to seminary and become more familiarly with ministry, the bible and that sort.

Amps- How can your fans follow you to see what you are doing?
Norris J- They can contact me through email at management@injmusic.com for any other of my social media outlets they can visit my web sight www.norrisj.com www.injmusic.com and all of the links are attached to my web sight.

I just would like to take a moment to thank AMPS Magazine for this opportunity even establishing and moving forward in this progressing in my career and allowing me to play my talent before several people and just thanking God for this moment and opportunity.