Mrs.Brenda Coleman invited A.M.P.S. Magazine to Atlanta’s APEX Museum which is rich in history and content. Mrs. Coleman is one of the leaders for the Atlanta CARES program, an organization that focuses on mentoring and salvaging the lives of children in the community.Ms.Coleman, along with the staff of CARES, works very hard to brighten and to change the lives of many and to alter the fate of children who might otherwise engage in dangerous activity. 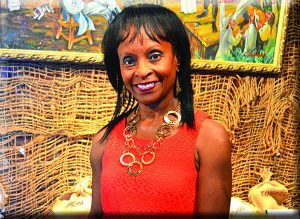 AMPS: How did you become associated with the CARES program?
BC: Well I initially started back in 2005 when Susan Taylor offered an ad in Essence magazine where she was planning to start a new volunteer effort – I had no idea what it entailed, but I knew that if Susan Taylor was in charge, it would be magnificent. We met at Morehouse College and that’s where the whole movement began. A lot of faith-based leaders, community leaders, corporate leaders, civic leaders, they came together to talk about the plight of our youth: the high drop-out rates, the enormous amount of violence in the community, and they all decided that mentoring would be the way to salvage our youth. They looked at the research on mentoring, and they found that children who are mentored are less likely to engage in drugs, premarital sex, drop out of school, and engage in violence. So, mentoring was certainly the key to salvaging our youth.”

AMPS: What exactly does the acronym CARES stand for?
BC: “Actually, it’s not an acronym. It’s in all caps to emphasize how much we care about our children. Actually we have over 60 affiliates across the nation and we were the first affiliate – we were the pilot”

AMPS: How has being a leader for this program positively influenced your life? What do you get back?
BC: “Well, it’s a very, very rewarding experience. I’ve always wanted to give back to the community and this was the perfect position for me to do that. I’ve had the opportunity to meet so many interesting people who are all interested in giving back and salvaging the lives of our children. So many people who are just so self-sacrificing, because when you’re doing this kind of work, it’s not for the money. You have to be very passionate about it. We have a volunteer group. We don’t have any paid staff. Our entire staff is just a group of people who want to give up their time to help the youth.

AMPS: What inspires you to continue working in this field?
BC: “When I have children coming up to me and telling me how our organization or how one of our mentors has transformed their lives, that’s what really makes it so meaningful. What drives me even more is that fact that I’ve been so blessed. I have 3 grown children who have advanced degrees…and I know a lot of parents can’t really witness that. I know I’ve been blessed. So when you’ve been blessed, I think you have an obligation to reach back. So that’s what drives me.”

AMPS: Any particular moments that have revealed to you how important your job is to this community?
BC: “Yes I have seen more than one child (we do a lot of tracking of our students) with academic achievements, whose grades have improved, they’re not engaged in suspension, so that’s how I know we’re making a difference.

AMPS: What does it take to be a CARES mentor?
BC: “Well, we just ask for a one-year commitment of four hours a month…we just need something consistent. The research shows that children who are mentored for less than a year, it actually causes more harm than for who receive no mentoring at all because they (the children that we work with) have experienced so much abandonment. They (CARES mentors) have to be a good role model and they work hard to protect our children. All mentors MUST undergo a background check because our goal really is to shelter them from any more harm. We tend to really engage them in more group mentoring than one on one. It’s a lot less liability for our mentors – a lot of people are reluctant to mentor for that reason. Also, you can have a greater impact if you’re mentoring more than one child at a time, and the children feed off of each other as well.”

AMPS: What kinds of events does the organization host?
BC: “Our children are suffering financially, academ- ically, economically, and their parents are in a gene- ration that are really lagging behind financially. So we figured we need to do more than mentor our children. We wanted to prepare them for careers in STEM because the research shows that people with careers in STEM make 25% more than their counterpart and they’re less likely to get laid off from their jobs. We are really engaging in a 5-year campaign to provide opportunities for our children to learn more about STEM careers and participate in STEM activities. Our launch was last November. We held a STEM-fest at Georgia Tech, and we had initially planned for 150 students to attend, but by November (the “day-of”) we had 300 children enrolled and we had to turn 200 away. We had no idea there was such an interest in STEM. Because of that, we planned the summer camp hosted at Clark-Atlanta University June 10-14 and June 17-21. We have a two-fold purpose: to keep them busy and to help them learn. In the fall we plan to launch Saturday STEM days once a month as an opportunity to keep participating in STEM activities.

AMPS: How would someone go about getting involved with CARES if they were interested?
BC: “If they would just contact me, we would put them right to work. We have several volunteers helping with the camp, and they will mostly be just sitting in the classrooms and just supervising.” AMPS: Roughly, how many lives have been changed by Atlanta CARES? BC: “I would say since 2005, we have recruited 500-600 students a year, so about 3,000 total”